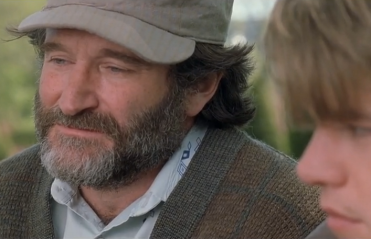 After hearing of the heart-sinking news of Robin Williams’ suicide yesterday, I immediately put on Good Will Hunting (1997), which in my opinion, was his best role ever, and one of the most poignant dramas ever done on the screen. Tears are inevitable, every time.

Robin Williams is Dr. Sean Maguire, the emotionally-worn and warm-hearted therapist that gingerly melts the coldest depth of Will Hunting’s (Matt Damon) heart through his listening alone. I’ve watched this film over 10 times but what struck me upon watching it last night was that, ironically, perhaps this kind of therapy was what Williams lacked in his own life.

In the film, Robin Williams plays the open ears and heart. He lets Will unload on him his emotional baggage, insecurities, broken-home history, and angst. He listens without judgment, only raising his voice when necessary. He plays this character perfectly, and as we’re told by friends, family, and fellow friends in Hollywood, was not too different off-screen. It makes you think, though…had Robin Williams, along with any emotionally/mentally-tormented person that have ended his or life, had the right “Sean” to listen to them…would they be able to overcome this struggle without self-harm?

Of course, Good Will Hunting is just a movie, and Dr. Sean Maguire is simply one of many of Williams’ award-winning roles. Yet, his purpose in Will’s life sends a sharp message about reality…and that’s the power of listening. To listen to the problems of others, whether hard to “dig out”, seemingly unimportant, or wrapped in layers of hostility or insecurity that may take a while to break down. If each of us could be someone’s Sean, maybe depression and suicide could finally stop being issues…or at least lessened.

We’re always shocked at the conditions that surround these particular losses of life, mostly because we’ve somehow formed this perfect, shining image in our heads of a celebrity or public figure with a seemingly ‘given’ sense happiness and wellbeing, the kind they deliver consistently on the stage or screen. Likewise, we are taken aback when the truth surfaces of this cheerful, light-hearted individual’s figurative, internal demons. Sadly and realistically, however, depression eats away at anyone–rich, poor, famous, beautiful, average, or other. The only difference was William’s ability to hide it, through his comedy, dramatic acting, and extraverted and warm connection to those around him. Whether conveying these internal battles to more of those around him would have made much of a difference or not is unsure, but what we can gather from Robin William’s life, death, and role in Good Will Hunting is that telling someone of our hurt doesn’t hurt…and listening sure doesn’t either.