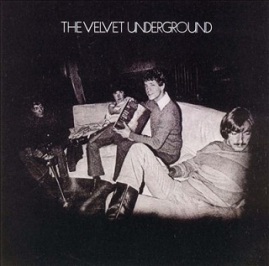 Song: “What Goes On”

Very likely the forefathers of psychedelic rock, The Velvet Underground–NYC’s legendary hippie-rocker 4-piece–made it just about impossible for the ’60s to ignore fuzzy, distorted punk sounds. A definitive model of American youth revolt and acid-dabbling, circa-Vietnam War, the band’s repertoire gracefully shuffled gritty blues jams in with druggy, kaleidoscopic ballads. Fronted by gruff-voiced, lead singer Lou Reed, The Velvet Underground’s career was eerily short-lived, even with an artistically genius manager like Andy Warhol. The band fell off just barely after the 70s had begun, but not before shoving rock ‘n’ roll into such a radically wild trajectory that any more than their 8-year presence would’ve been overkill.

The Velvet Underground’s 1969, self-titled LP arrives at the pinnacle of the band’s angsty development—somewhere between the narcotic, unmuffled deviance of The Velvet Underground & Nico and the sunny, Beatles-ish substance of Loaded. The album, despite waves of dreamy balladry (“Pale Blue Eyes” ), settles mostly into snappy, true-rock repose.

“What Goes On” is, hand down, the fueling jam of the album, borrowing a slightly-Hendrix buzz to honor an otherwise rock-roots dedication. There’s even a little Chuck Berry in there. Laced with spirited organ climbs in the background, the 5-minute track is half Lou Reed-belting, and half instrumental jam–and sufficient validation of the Underground’s electric potency, even when they’re not doing much.

A puzzled and playful Reed addresses a lover’s emotional stability, but it’s hard to take his judgment too seriously, considering his own weirdness-track record…