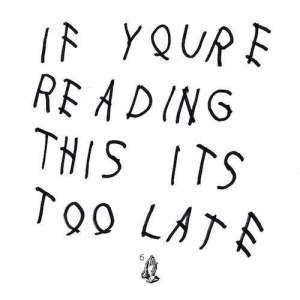 In the early moments of Drake’s impromptu album/might-be mixtape drop on Friday evening, high-emotion Internet chaos ensued. Twitter almost broke with OVO enthusiasm, the mixtape black-market commenced the trade of leak links, self-proclaimed ride-or-dies scurried to iTunes for legal purchase, and there was a universal barrage of Gen-Y praises for ‘the boy’–mostly for ending the Drizzy dry spell.

Some time after, a sour series of Drake conspiracy theories began to circulate–most of them in regards to the reason behind the $12.99 album. Some proposed that the shotgun release was simply a sly escape plan from his current label, Cash Money–a way of checking the last box on the 4-album contract requirement without putting too much effort into it, using ‘throwaway tracks’ that didn’t make it onto his true upcoming album (Views From The 6).

All suspicions aside, there’s little complaint to be made. Whether tossed aside as second-class tracks or intentionally arranged to OVO liking, the material of If You’re Reading This It’s Too Late affirms the fact that just about any Drake is good Drake.

For a listening supplementary and clarifying breakdown of the 17 tracks, here’s a song-by-song walkthrough…

The album’s brag-erture. Drake sets the mood with a drowsily-delivered, proud hook, and closes with a contrarily vulnerable line: (“And I, I just can’t pretend/ Seen too much, it’s so hard for me to let new people in…). [You could cut the shade with a knife]. A dark, sultry revamp of Ginuwine’s “So Anxious” fades in and out— the chopped-and-screwed sampling a smooth production specimen from PARTYNEXTDOOR.

Drake reboots his focus with a dramatic, fired-up set of bars (32+)—mostly in reference to naysayers, unfaithful chicks, and the combat of any permeating negative vibes: (“Got a lot of people try’na drain me of this energy…”). The beat is austere, with a tight drum machine riff ;Boi-1da and OB O’Brien on the mixing-board.

An near-part II of “Energy”. The track continues in “wayyy up” fashion, with taut wordplay and heavy bass. Another Boi-1da production.

On a reverberating track as self-explanatory as its title, the Toronto singer-rapper hurls at us flashbacks and adolescent Ferrari dreams—all the while, “runnin’ through the 6 with my woes”—and maintaining his focus. In typical Drake fashion, ‘realness’ is a virtue he feels obligated to repeat to us.

Although he very well nears ‘broken record’ status at this point, Drake manages to recycle the same principles from “Energy” and “Know Yourself”, but over warped, layered vocals and a downtempo instrumental that almost sounds submerged, (compliments to Boi-1da and Frank Dukes). Likewise, the track’s dazed, disoriented effect matches the same apprehension that lines the singer’s thoughts: (“Yeah, I stay up late at night, thinkin’ ’bout my life/ Want a lot, will I get it all? Ain’t no tellin’…).

A collaboration with longtime producer Noah “40” Shebib, “Madonna” works in a slinky beat-sequence with more venting and even more 808s. Vague murmurs to an unidentified girl drown in and out, leaking empty, uncertain promises hindered by the bittersweet career Drake always tells us about.

The tonal turning point of IYRTITL; Drake’s calm and collected victory lap track after a prior, three-track interval of proving himself (or at least reminding listeners of his come-up). The song itself is split between fuzzy vocal recordings/a moody opener and the signature Drizzy outro: a slow, emotional fadeout à la “0 To 100/The Catch Up”. It’s like the exhale following a long chest puff-out. Beat-mixing credits go to Vinylz, Amir Obe, and Most High.

The first slow-jam and PND collab on the album; Drake alternates verses with the singer while numbing throbs of dark, R&B trance provide the background music. The last 00:28 dips into video game-like reverie, and with a chipmunked Ciara sample, it’s the right transition to its sleepier second half, “Wednesday Night Interlude”.

The previous track’s continuation and closure. Tranquilizing and the perfect supplement to infatuation…(“Name another woman, ain’t no other woman that should comfort me when I’m lonely/ I’m running on empty…”).

One of several “turn-up” tracks on the album; Drake retreats to his “No New Friends” subject matter.

The echoey and detached track is solitary; crooner-Drake emerges, sticking his hand into emotional discomfort and exposing his solitude. (But a self-inflicted kind at that). It’s uncertain whether he’s speaking in career or love terms. Hmm…

The subdued ballad of the EP; Gabriel Montano sings a hushed, falsetto hook, while Drake gets both spiritual and sentimental: (“These days, I’m letting God handle all things above me/ The things I can’t change are the reasons you love me…”).

The last track not only serves a conclusive purpose for the album, but also finalizes the trifecta for “9 AM in Dallas” and “5 AM in Toronto”, two Drizzy notables and usually reliable clues that a serious creative reload is in the works. Clear-eyed and reflective of rejuvenation, Drake’s closing remarks predict nothing but ascension: (“Winter’s here already but somehow I’m heatin’ up/ Been observing the game and felt like I’ve seen enough”…).

Buy it on iTunes here: