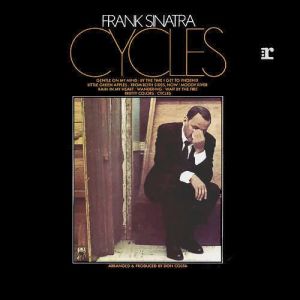 Song: “Rain in My Heart”

You wouldn’t think that cranking out an easy listening compilation in the height of dazed hippie takeover would be an easy task; especially for Frank Sinatra, the championed OG crooner whose American Standards/Songbook peak–[at least the period most agreed on as such]–was since long gone.

But alas, in 1968, arrived Cycles–a Christmastime-released, well-crafted array of folk-to-soft pop covers from the seasoned singer. From his baroque-y take on Joni Mitchell’s soul-subduing cut, “Both Sides, Now” to kindergarten lulla-croons (“Little Green Apples”), and stuff right out of a country-road hymnal (“Cycles”), the album is Frank in all variations…yet none of these musical terrains feel contrived.

The refreshing air of the album, in fact, is Frank’s adherence to his old-school-slick pipes over mostly pop arrangements. While the scenery throughout Cycles may at times flicker to folky, there’s no uncomfortable submission to airy-voiced, flower-childspeak, despite its generational context.

While all of its songs make the mark–it’s the 10-track LP’s chest-belty overture, “Rain In My Heart”, that’ll truly catch your breath. The track’s murky, mournful entrance is like a ’40s romance film’s enfeebling buildup…which, at first, seems not quite Sinatra. It’s only when the surging drum & piano hook bursts out of the darkness and spills waltzy boldness all over the lovespell that a warm familiarity of feather-fluffing, “My Way” Frank infiltrates the ears. It’s wide-open-hearted and smooth, overpoweringly so.