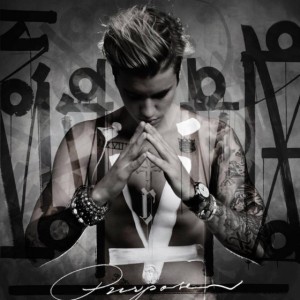 Bieber. The ‘love-to-hate/hate-to-love’ poster child of tatted rebellion and shaggy blonde angst, and likely, the worst-case model for premature fame-exposure. Flash-forward a year and a half from the mop-bucket antics, suburban speed racing, and general face-palming idiocy, and here we have his apology; a belated, side-eyed, hit record one…but a subtle peace offering at that. Its sufficiency is yours to weigh…though as evident through its feverish love for any Biebs material, the radio’s already confirmed it for you.

On Purpose, Bieber doesn’t fire shots during the lengthy 18-track presentation, but he does lick his wounds a lot…[mostly the paparazzi-inflicted ones]: (“Cause life’s not easy, I’m not made of steel/ Don’t forget that I’m human, don’t forget that I’m real…”). These confessions, though blame-shifting in nature, are the backbone of “Sorry” and “I’ll Show You”, a downtempo, Skrillex-assisted EDM cut that lays the groundwork for Justin’s dismissal of any deemed Superman status.

Purpose is light, in content and production. But so is most EDM-classified material. And after two years of drama, would we really want something ‘heavy’ from the singer? Bieber seems to circle volatile girls like a small dog, evident on the bouncy, radio-perfect but recurrent “What Do You Mean”….(“When you nod your head yes, but you wanna say no/ When you don’t want me to move, but you tell me to go…”). Fluffy puppy love isn’t a problem, but when it serves as the thematic for half the album’s tracks, there might be one. (See: “Company”, “Get Used To It”, “Where R U Now”). It’s still on my AM commute playlist, though.

Purpose‘s boredom might also be related to Bieber’s instrumental backing. At the time of Journals‘ release about a year ago, Justin was dabbling in trouble, and more positively, R&B. His voice melted with the genre, producing track-after-track gems, like the slick “Heartbreaker” and woozy, bass-sunken “All That Matters”. It sounded natural immediately; with the singer’s propensity for blue-eyed soul, riffs, and runs, it was a match made in heaven. Sleek and effortless. So considering pop radio’s MO, it’s no surprise that just a few songs landed regular rotation. It seems, now, that either compulsion by a more basic-eared fanbase or over-mingling with clubby, techno producers who spin the same beat for hours, but receive unending crowd acclaim from neon-clothed frat boys, Bieber’s switched up the beats. Whatever the reason, the new sound–call it dubstep or call it dullness–is limiting Bieber’s vocal outreach.

There are the handful of keepers, specifically the ex-scathing “Love Yourself”, during which Bieber vents loosely, rejects late-night apologetic texts from a girl, and even lumps in his mother’s distate for her, prior to the denouncing hook: (“Cause if you like the way you look that much, oh baby you, should go and love yourself”). Ed Sheeran co-wrote it and jumps on background vocals for a little added disgust. Then there’s “No Sense”, an ambient-trap interlude that hosts Travis Scott, who continues to ride his post-Rodeo wave in an unusually romantic setting; (“Been around a million stars, none of them shine brighter than you…”).

Purpose is perfect for radio play, ideal for workout accompaniment, and more than appropriate for car karaoke. But with pipes rarely found in pop music’s Autotune roster, Justin leaves us wanting a little more him and a little less Skrillex, Diplo, and computerized synths. After all, it’s never a vocal or talent issue that bars Bieber from sounding the best; but rather, as it seems in life, the crowd with which he surrounds himself.